Secretary of State John Kerry hosted an international symposium Our Ocean to take steps to create a healthier ocean. The conference, held at the State Department on June 16-18, focused on three key issues sustainable fisheries, marine pollution, and ocean acidification. Marine pollution narrowed the relevant topics to marine debris, nutrient pollution, and ocean acidification. Dr. Nancy Rabalais, LUMCON Executive Director, set the stage for the nutrient pollution panel with State of the Science followed by a presentation on the Baltic Sea by Dr. Dan Conley (Lund University, Sweden) and two solution presentations by Crispin d’Auvergne (Government of Saint Lucia) on their efforts to address nutrient pollution and Kari Niedfeldt-Thomas (The Mosaic Company) on best management practices in agriculture. 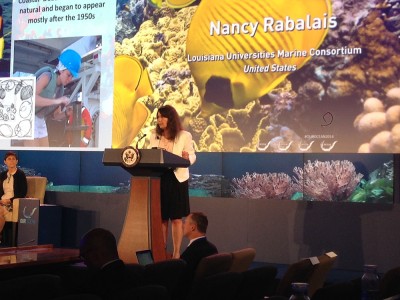 The ocean covers almost three-quarters of our planet, but our ocean today is at grave risk, and the damage is not happening by accident. Human activity is the cause. Harmful fishing practices, even illegal fishing; giant garbage patches; hundreds of dead zones; and rising carbon dioxide levels all of it threatens life in the sea. That is the bad news. The good news is it doesnt have to be that way.

Secretary of State John Kerry places the ocean as a high priority for international conservation and stated in March, 2014, We need to elevate the environment in everything we do.

You can see Secretary Kerrys call to action video, many good ocean videos, most presentations from the meeting, and follow-up activities at http//www.state.gov/ourocean.