The Louisiana Universities Marine Consortium (LUMON) and its colleagues at Louisiana State University and A&M college, Louisiana State University Ag Center, and 12 other U.S. research institutions were awarded $16,113,930 over the next three years to follow the fate, distribution and effects of the oil from the Macondo well that erupted in April 2010 as a result of the failed operation of the bp-owned drilling platform Deepwater Horizon. The award was announced by the Gulf of Mexico Research Initiative (GoMRI) on November 14 and will begin January 1 of the New Year.  This team of GoMRI-related projects is also known as the Coastal Waters Consortium.

LUMCON is the lead institution for the joint study that will focus on the fundamental themes of the physical distribution, dispersion and distribution of petroleum, the chemical evolution and biological degradation and interactions with ecosystems, and the environmental effects in the coastal waters and marshes of the Gulf of Mexico. We aim to “provide a fundamental understanding of the dynamics of these events and the associated environmental stresses, amidst all the multiple stressors of our coastal landscape,” said Dr. Nancy Rabalais, Project Director/Principal Investigator.

LUMCON’s portion of the grant provides the administrative umbrella of direction and finances, but also includes the research programs of two LUMCON scientists and an active education and outreach program. Dr. Brian Roberts of LUMCON will focus on the biogeochemical processes of oil and un-oiled marshes in the coastal marshes where the Macondo oil saw its initial effects. His research is related to carbon, nitrogen and phosphorus cycling in affected and un-affected marshes, as well as differences in greenhouse gasses released from the marshes into the atmosphere. He will also lead a monumental effort in creating and using large mesocosms of ‘marsh environments’ that can be used for manipulative experiments related to oil exposure. These experiments and the mesocosms will be located at the LUMCON Marine Center in Cocodrie. “Many of the consortium investigators will be conducting experiments in these ‘mini-marshes’” said principal investigator Brian Roberts. Dr. Nancy Rabalais will administer the overall project and conduct experiments of her own on the single-celled phytoplankton that live on the sediments of the marsh as they are affected by remnant oil components, especially volatile hydrocarbons in the summer. “We know from the research results of the first round of CWC investigations from researchers at Louisiana State University that many of the more volatile hydrocarbons still exist in the sediments,” said Dr. Rabalais, and vaporize in the summer, thus affecting marsh organisms. The single-celled plants called benthic phytoplankton are the basis of many trophic layers of the food web. 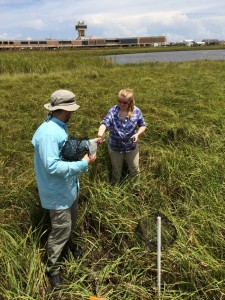 LUMCON is also responsible for the outreach and education components of the next years’ projects. The LUMCON Marine Education department works to bring K-12, undergraduate and graduate students, and all levels of the public into contact with their coastal environments in the context of coastal change including oil spills. “The ability to bring the immediate results of the science of the Coastal Waters Consortium is an amazing resource for the many education programs, teacher workshops, and adult education activities that we provide as part of CWC, and we want to continue with many more exciting activities,” said Murt Conover, Senior Marine Educator, LUMCON. Watch for the release of a video of the first part of CWC on the CWC website, https://cwc.lumcon.edu.