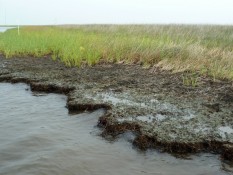 (Click to enlarge) An oiled Louisiana marsh shoreline as it appeared in the summer of 2011. (Photo from Linda Hooper-Bui)

They found that, after nearly three years, the concentrations of volatile organic compounds (alkanes) that are not considered major health hazards significantly declined, but they remained higher than pre-oiling levels. The concentration of various polycyclic aromatic hydrocarbon (PAH) compounds that are considered potent pollutants, however, either stayed the same or increased. Some of the PAHs that increased could potentially impose larger toxic burdens on marsh life than when the area was first oiled.

The researchers’ projections for recovery show that some hydrocarbons may remain in, and negatively impact, the sampled wetlands for decades. They published their findings in the July 2014 edition of Marine Pollution Bulletin: Changes in the concentration and relative abundance of alkanes and PAHs from the Deepwater Horizon oiling of coastal marshes.

The Shoreline Cleanup Assessment Technique Program (comprised of Federal, State, local and industry representatives) estimated that about 1,773 kilometers of Gulf shoreline were significantly oiled and nearly half were coastal marshes in Louisiana. Clean-up was attempted in less than 10% of all oiled marshes, leaving recovery to natural processes. To estimate degradation progress, the researchers examined 418 samples of marsh soil (zero to five centimeters deep) collected from three Louisiana estuaries prior to and for three years after oiling. The researchers used gas chromatography and mass spectrometry to identify and quantify 28 alkanes and 43 PAHs over time. They also analyzed Macondo source oil for comparison with oil in the field samples.

By September 2010, the concentration of total alkanes and total PAHs were 134 and 110 times higher, respectively, than pre-oil levels. By October 2012, the concentration of alkanes had significantly declined to 20 times the pre-oil conditions and continued declining over the next year. However, PAH concentrations increased to 374 times pre-oil levels. Five aromatics accounted for this increase: naphthalene (24 times), C-1-naphthalenes (17 times), and benzo(a)pyrene, dibenzo(a,h)anthracene, and benzo(g,h,i)perylene (61, 1656 and 784 times, respectively).

The team explained that multiple factors influence the rate of hydrocarbon degradation (molecular weight, volatility, solubility, oxidation, sediment composition, oxygen and temperature), but that alkanes are generally prone to faster evaporative losses than aromatics. The oxygen-depleted (anaerobic) marsh soil in which PAHs settled was a primary reason for the slowing degradation. As of June 2013, the average PAH concentration equaled or exceeded the levels at which stressors occur in marsh fish, plants and insects and may lead to a cascading effect on the interdependent ecosystem structure and functions.

The researchers acknowledge challenges that complicate determining Macondo oil fate, such as multiple hydrocarbon sources and the potential for oil and oil by-products to move between sites. However, they state that the consistent decline in total alkanes compared with continued elevated aromatics levels and the rise in five of them suggest an in situ source and not re-mobilization. They also suggest that as compounds degrade, the creation of new toxins and synergistic effects is possible. Prior studies and their results led the team to conclude that “it would be a risky proposition to assume that the toxicity of some oil analytes have been in decline since the marshes were first oiled in 2010.”
The study’s authors are R. E. Turner, E. B. Overton, B. M. Meyer, M. S. Miles, and L. Hooper-Bui.

This research was made possible in part by a grant from BP/The Gulf of Mexico Research Initiative (GoMRI) to theCoastal Water Consortium (CWC). Other funding sources included the National Science Foundation (Rapid Grant DEB-1044599).

The GoMRI is a 10-year independent research program established to study the effect, and the potential associated impact, of hydrocarbon releases on the environment and public health, as well as to develop improved spill mitigation, oil detection, characterization and remediation technologies. An independent and academic 20-member Research Board makes the funding and research direction decisions to ensure the intellectual quality, effectiveness and academic independence of the GoMRI research. All research data, findings and publications will be made publicly available. The program was established through a $500 million financial commitment from BP. For more information, visit http://gulfresearchinitiative.org/.